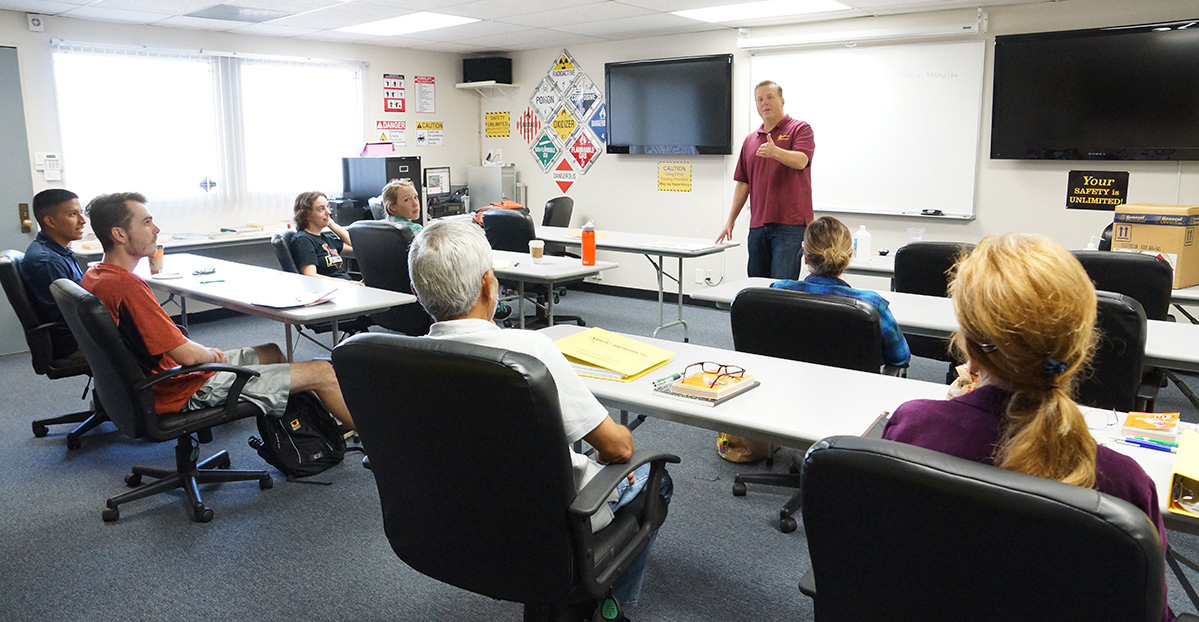 Free-$$$ Safety Unlimited, Inc. http://www.safetyunlimited.com
2139 Tapo Street, Suite 228 93063 Simi Valley CA
1-855-784-2677 (866) 869-7097 sales@safetyunlimited.com
Announcement Regarding Safety Unlimited Classroom Training (REVISED 06-15-21)
As of June 15, 2021, California has removed the Blueprint and has mostly reopened the State. To this end, all of our classrooms will resume normal operations and student enrollment. We will continue to frequently wipe down our facilities to maintain cleanliness. The wearing of masks is optional for students. We are available for onsite as well as traveling course training. Any student showing signs of illness should NOT attend our training.

You will be leaving our online training website and navigating to our Safety Unlimited Store where we offer additional products and training.

If you wish to continue to our store, click the button below.

You will be leaving our online training website and navigating to the Safety Unlimited News Resource website where we offer ad-free safety industry news and articles.

If you wish to continue to out news service, click the button below.

You will be leaving our online training website and navigating to the Safety Unlimited Hazwoper Jobs Board where you can post and search for safety industry job listings.

While some organizations do not have the funding to conduct this type of training, a solution that seems to work well is to include our HUMINT topics as part of other required training, such as refresher training for Police and Fire.

Homegrown Violent Extremism - Disrupting the Pathways to Radicalization
The Threat of the Islamic State and Radicalization in the Homeland
Iran and Hezbollah: An Operational Guide For Law Enforcement, Fusion Centers and First Responders
Overseas Personal Security and Travel Awareness Training for Private Sector and Government Personnel

Other topics we can address include:

The Boston Marathon Bombing underscores a growing and deadly trend in the United States: "Homegrown" Violent Extremists (HVE) who are influenced and radicalized in the U.S. by foreign elements and groups utilizing the internet, social media, direct contact, and other means. In the decade since the terrorist attacks of 9/11, there have been numerous successful and disrupted "Homegrown" violent extremist terrorist attacks and plots inside our Homeland. This has become the "new face" of terrorism that we will face now, and in the future.

Our one and two day courses will help law enforcement officers, military officials, first responders, and civilian authorities to identify, recognize, and disrupt the pathway to radicalization that is THE key element in the ability of Homegrown Violent Extremists to form, radicalize, train, and carry out terrorist attacks inside the U.S.

This one day training course addresses the rising tensions between the U.S. and Iran, and the ever growing prospect of a military strike against Iranian targets, which may cause a dramatic increase in the threat of Iranian sponsored terrorism in the United States.

This course is designed for law enforcement officers and first responders who may encounter a threat from Iranian or Hezbollah operatives in the U.S., or who may have responsibilities for Iran and Hezbollah investigations and intelligence within their areas of responsibility.

This course provides in-depth strategic, tactical, cultural, and analytical review of the current situation between the U.S. and Iran and its implications for local law enforcement, the military, first responders, and civilian support organizations in the event of conflict between Iran and the West.

Our training focuses on preparing government, corporate, and private sector employees who travel overseas at the behest of the company to be able to identify and avoid foreign threats, travel safely - with enhanced situational awareness - and understand the specific threats and problems in the areas they are traveling to and working in.

We have provided one and two day seminars on Overseas Personal Security and Travel Awareness Training to numerous private sector and U.S. corporations to better prepare and protect their employees when traveling overseas on commercial business. In addition, we have provided this same training to the United States Secret Service and the U.S. Naval Special Warfare Group (SEALS) with the objective of preparing their employees and operators for work and travel in foreign areas.

CIA Operations Officer - Mr. Dougherty retired in 2012 with 25 years of service in the CIA's Directorate of Operations. He has extensive operational and on-the-ground experience in the Middle East, South America, the U.S., and Europe. He has managed and run operations worldwide focused on Counter Terrorism, Counter Proliferation, Counter Intelligence, Counter Narcotics, and HUMINT. Mr. Dougherty also gained valuable intelligence experience while assigned as a Joint Terrorism Task Force Officer working Counter Terrorism in the United States.

What Our Instructors Provide

We bring qualified counter-terrorism and intelligence expertise that is uniquely capable of providing the very best analysis and protection recommendations to our nation and its allies.

Our capabilities are a complimentary mix of intelligence collection, analysis, operations, technology, support, and training. We have an extensive background in providing intelligence training to local, state, and federal law enforcement agencies. Our Subject Matter Experts (SMEs) are second to none, with a lifetime of training, education, and knowledge in their respective fields.

The Threat of the Islamic State and Radicalization in the Homeland

The current threat from the Islamic State (IS) has never been greater:they are a modern-era insurgency/extremist group who have re-established the Islamic Caliphate, control large areas of territory in Iraq and Syria, possess heavy weapon systems, and are fueled by a radical Islamic ideology. The Islamic State has killed Americans and has motivated, inspired, and directed American Homegrown Violent Extremists (HVE’s) to carry out terrorist attacks in the Homeland. In addition to focusing on the threat from IS worldwide and in the U.S., we will concentrate on the real danger of the ongoing radicalization of U.S. born individuals, and how the Islamic State recruits Americans. We will provide an overview of the radicalization process inside the U.S., discuss how to recognize this process through Pre-Incident Indicators, and look at ways to counter the radicalization of individuals in the U.S. before they carry out violent activities. This 16 Hour intensive course is specifically designed for Law Enforcement professionals, First Responders, Military personnel, Terrorism Liaison Officers (TLO’s), and Private Sector professionals engaged in the security industry.

The Instructor is a 26 year veteran of the CIA, where he served as an undercover operations officer in the Middle East, South America, Europe, and the U.S.,carrying out Human Intelligence (HUMINT) operations against a wide variety of foreign terrorist groups including Al-Qaida, Hezbollah, and the Islamic State. The Instructor also has extensive experience working against these foreign terrorist group targets in the U.S. through his active participation in a FBI Joint Terrorism Task Force (JTTF). The Instructor currently provides HUMINT training to U.S. military Special Operations Elements directly involved in the fight against Al-Qaida and the Islamic State.